Representatives of labor unions from around the country were expected today at Tannehill State Park for a rally in support of striking coal miners with the United Mine Workers of America.

The miners began a strike more than a year ago against Warrior Met Coal in Brookwood. The UMWA organized a caravan today to show support for the miners, who union leadership said last week now number around 900.

Members of the United Auto Workers, United Food and Commercial Workers, Association of Flight Attendants, and Unite Here were expected at the event.

The union hosted a similar rally last August in Brookwood. 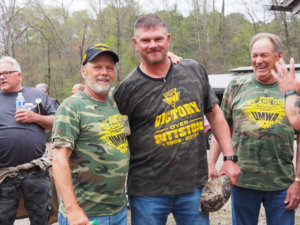 The strike began April 1, 2021. The old agreement with the union was negotiated as Warrior Met emerged from the bankruptcy proceedings of the former Walter Energy, which declared bankruptcy in 2016.

Union members say they made numerous concessions at that time in pay, benefits, holidays, overtime and in other areas to keep the company going and get it out of bankruptcy. Those concessions, they say, have not been restored in subsequent offers from the company.

According to Warrior Met Coal’s quarterly reports, the company last year incurred $21.4 million in non-recurring expenses directly attributable to the strike for security and other expenses, and $33.9 million in idle mine expenses.

HOLD THE LINE! ✋🏽Today UNITE HERE @unitehere23 New Orleans,Biloxi & Georgia went to Warrior Met to stand with the Union of Coal Miners🏔 @MineWorkers who have ALWAYS had our backs as we continue to fight for dignity, respect and fair wages. Retweet in solidarity✊🏿✊🏼✊🏾 pic.twitter.com/icdSQKpqHv

Honored to be in solidarity with Warrior Met Coal Workers and @MineWorkers in their more than 1 year strike and to represent @justice_ucc. #DignityofWork #PeopleOverProfits #CaravanToWarriorMet pic.twitter.com/vyL7sfcIFW

L23 New Orleans, Biloxi and Georgia on our way to Warrior Met! SOLIDARITY with the striking coal miners!!! See you soon @MineWorkers pic.twitter.com/Ig7QyHPgqj