Labor Is Demanding an End to Wall Street Stock Buybacks

Stock buybacks are a major way the rich can hoard their wealth instead of investing in workers — which is why a coalition of unions is demanding an end to such buybacks.

As gas prices at the pump continued to make national news and undercut voters’ confidence in the economy, Shell plc announced $4 billion in stock buybacks and increased dividend payments to its investors less than two weeks before the 2022 midterm elections. This prompted President Joe Biden to criticize the company’s decision and threaten a windfall profits tax on energy companies. Yet the reality of such legislation passing Congress was low. And only three days after President Biden’s statement, ConocoPhillips increased its existing share buyback authorization by $20 billion and boosted quarterly dividends by 11 percent.

Oil companies’ massive and record profits, together with an apparent disregard for the presidential threat of windfall tax legislation, highlight how the ability to affect economic change may not primarily lie with politicians at this point, but rather in the hands of US workers and their labor unions. Take the issue of oil company stock buybacks.

“We have serious concerns about the lack of investment back into facilities, particularly given the profits reported by the oil industry as a whole and the number of announced stock buybacks,” explained Mike Smith, chair of the United Steelworkers (USW) National Oil Bargaining Program.

Oil company stock buybacks exemplify economic trends that a majority of Americans believe help the wealthy while hurting the working class and the poor. With rising consumer prices and decades of stagnant wages cutting into workers’ household budgets, Americans have consistently expressed concerns about governmental leadership on economic issues and low economic confidence over the last year.

Smith signaled that USW’s future bargaining and campaigns in the oil sector will mobilize workers to confront these corporate practices: “Rather than focus solely on shareholders, it’s essential for companies to commit to resources like safer technologies and decarbonization that will provide longevity and stability for the energy industry and its workforce. We intend to continue pushing for these types of investments.”

USW is not alone in this push. To fill a void of adequate governmental regulation or reform that would address corporate greed as a driving force of economic inflation, labor unions representing workers in a variety of employment sectors are organizing campaigns that expose the underlying causes of economic inequality and address Wall Street stock buybacks, dividends, and ownership in companies.

A handful of Wall Street asset management firms known as the Big Three — BlackRock, Vanguard, and State Street — together comprise the largest shareholder in approximately 90 percent of S&P 500 firms and 96 percent of Fortune 250 companies. This concentration of ownership alarms both sides of the political spectrum for different reasons. But legislative regulation has yet to rein in Wall Street firms that arguably violate antitrust laws.

A recent Duke Law Journal article, “Agents of Inequality: Common Ownership and the Decline of the American Worker” by Zohar Goshen and Doron Levit, examines how the rise of powerful institutional investors like the Big Three impacts workers. The study finds that common owners — defined as “a few powerful institutional investors controlling large stakes in most U.S. corporations” — have contributed to a trend where “workers are bringing greater returns to their employers [and] shareholders are taking a larger and larger cut of each corporate dollar, suggesting that common owners have the market power to reduce hiring and keep wages down.”

Perhaps nowhere in the US labor movement is this battle for workers against Wall Street capital more visible than in Brookwood, Alabama, where the United Mine Workers of America (UMWA) are engaged in a nineteenth-month strike with Warrior Met Coal.

Warrior Met, a company organized by Wall Street private equity funds during the US bankruptcy process, demanded significant cuts in pay and benefits from its workforce, then pocketed hundreds of millions of dollars as it took the company public. Now owned primarily by Wall Street management funds, Warrior Met spent $7.1 million during the third quarter of 2022 in expenses related to the interruption of business partially attributed to the labor dispute. It continued to post a net income of $98.4 million last quarter and has paid $1.3 billion in dividends to its shareholders over the last six years, according to UMWA.

“Warrior Met has the profitability to reach a fair contract with the union. It is simply choosing not to,” emphasizes Phil Smith, UMWA chief of staff and executive assistant to the president.

The extended labor dispute may be influenced by the fact that the Warrior Met Board has little accountability to its Wall Street shareholders, and company executives are able to cash in on this lack of oversight. 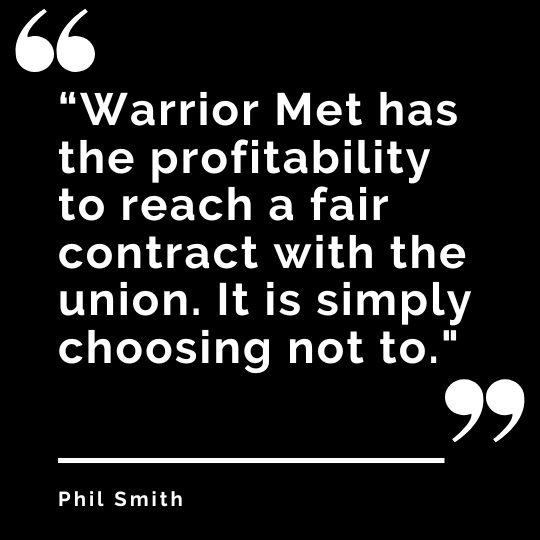 “Warrior Met is currently 96 percent owned by Wall Street investment funds. After the largest shareholders, where Vanguard has recently overtaken BlackRock, many funds own just a few percent. Ownership is very diluted among dozens of funds. No entity holds more than 15 percent of the stock, meaning there is no strong force bringing the company’s Board of Directors in line. The Board is essentially answerable to no one, leaving them free to take any action it wishes,” explains Smith.

The Warrior Met Board’s actions parallel a forty-year trend of an ever-widening gap between CEO and median worker pay that contributes to expanding and accelerating economic inequality in the United States. US Federal Reserve data shows that in the second quarter of 2022, the top 1 percent of earners held more wealth than the entire middle class in the United States combined (40th to 80th percentiles).

“Executive compensation is way out of proportion to worker pay and business operations,” Smith details. “In BlackRock’s report issued when it was Warrior Met’s largest shareholder, they highlighted this and voted against Warrior Met’s proposed Executive Officers’ Compensation Packages.”

Overall, stock ownership in the United States continues to be concentrated in the hands of the wealthiest, whitest, and most educated Americans, with 89 percent of stocks owned by households making over $100,000 a year. This means that both stock buybacks and dividend payments exacerbate racial and ethnic economic disparities, with black or Latino households owning only 1.6 percent of the total stock market value, according to US Federal Reserve data from the second quarter of 2022.

According to Goshen in an interview with Columbia Law School, “employees of public corporations are resigning themselves to depressed hiring and stagnant wages, even as their productivity — and consequently their value to the corporations — surges to record levels. Relatively richer investors get most of the benefit of higher stock prices.”

While Wall Street investment in corporations has accelerated economic inequality and Congress has yet to pass overarching legislation to address this, unions are strategizing how to represent their members in labor disputes with companies that have Wall Street firms as major shareholders, and address the profit flow from workers into the pockets of wealthy investors.

Stock Buybacks as a Tool of Wall Street Greed

US families and workers struggled with financial hardships coming out of the COVID-19 pandemic, including shifts in the job markets and increased costs for food, gas, and other necessities. At the same time, Wall Street lined the pockets of wealthy investors and corporate executives with record-breaking stock buybacks in 2021 worth hundreds of billions of dollars. Consumers still confront this corporate “greedflation,” in which unfettered and under-regulated accumulation of profits is concentrated in the hands of a privileged few able to increase consumer prices, suppress employee wages, and authorize stock buybacks for personal and shareholders’ financial gain.

Stock buybacks occur when a company purchases its own stock shares on the open market. Companies do this for two main reasons. First, stock buybacks are one way that companies distribute profits to shareholders who pay minimal taxes on buybacks versus dividend payments. This means that shareholders amass more personal income instead of paying more taxes that support schools, firefighters, libraries, and other shared public services.

“Stock buybacks were once illegal, and the practice should be outlawed again. After the pandemic slump, corporations across the economy have resumed this greed tool while citing ‘inflation’ and ‘supply chain’ issues for raising prices while racking up record profits,” explains Sara Nelson, president of the Association of Flight Attendants-CWA (AFA-CWA), representing fifty thousand flight attendants at nineteen airlines.

The AFA-CWA is part of an eight-union coalition that launched an aviation industry No Stock Buybacks campaign calling for airlines to “invest in the people on planes and all the workers who make them fly.” The goal of the campaign is to have airlines fix operational issues, provide enough staffing to meet the public’s travel demands, and conclude contract negotiations before any profit is sent to Wall Street through stock buybacks.

In aviation, as in other sectors of the economy, stock buybacks prioritize the short-term distribution of profits to a privileged few over reinvesting the money in the longer-term stability, growth, and operations of the company, particularly in preparation for unforeseen circumstances and market changes. From 2010 to 2019, major US airlines spent 96 percent of free cash flow on stock buybacks. In the five years before the COVID-19 pandemic, United, Southwest, American, and Delta spent more than $39 billion in stock buybacks. Thus, as airlines spent profits enriching wealthy investors for over a decade when hard times hit the airline industry in 2020, travelers and workers immediately felt the impact of the aviation industry’s investment in Wall Street instead of employees, operations, and cash reserves. Sean M. O’Brien, general president of the International Brotherhood of Teamsters, emphasizes that the campaign goals benefit both workers and consumers: “Greedy corporations would rather divert profits to Wall Street through stock buybacks than focus on workers and the flying public. We cannot allow this to happen. Our unions came together early in the pandemic to secure the Payroll Support Program (PSP) relief package which protected workers and also barred airline executives from stock buybacks.”O’Brien refers to how aviation unions successfully paused airline stock buybacks by intensively lobbying for PSP legislation that met the needs of their members while recognizing that travelers also benefit from airlines’ investment in operations and staffing. Money that airlines received through the PSP, initially part of the 2020 CARES Act and extended under subsequent legislation, set financial regulations on airlines receiving program funds, including capping executive compensation and banning stock buybacks for one year beyond the relief period. However, that ban on stock buybacks concluded on September 30, 2022 — directly after a “summer of airline chaos” with increased flight cancelations, delays, and prices.Through union-endorsed PSP legislation that “included strong labor protections,” president of the Air Line Pilots Association, International (ALPA) Captain Joe DePete explains that “U.S. carriers and their crewmembers were well positioned for the increased travel demand we are experiencing today. However, some airlines failed to properly plan, resulting in operational issues and increased cancellations causing significant frustrations for passengers and airline employees alike.”

The No Stock Buybacks coalition channels public frustration over airlines’ recent unpredictable operations and mobilizes union members to pressure the aviation industry at a time when, according to Nelson, “nearly 700,000 aviation workers are at the table bargaining for our next contracts. . . . Our efforts have successfully stopped the return of stock buybacks in aviation for now.”

New legislation has yet to address windfall profits or stock buybacks; the No Stock Buybacks coalition has effectively deterred airlines from re-engaging in this practice. Together with UMWA, USW, and other organized workers that demand their unions engage in creating a more equitable economic system, labor is challenging Wall Street power.