From the day hundreds of UMWA members walked off the job at Warrior Met Coal, Inc., there have been several unprecedented twists and turns in their struggle. The biggest one of all came on July 22, 2022, when Region 10 of the National Labor Relations Board (NLRB) issued an assessment of damages it said the UMWA owed to the company for picket line activity. 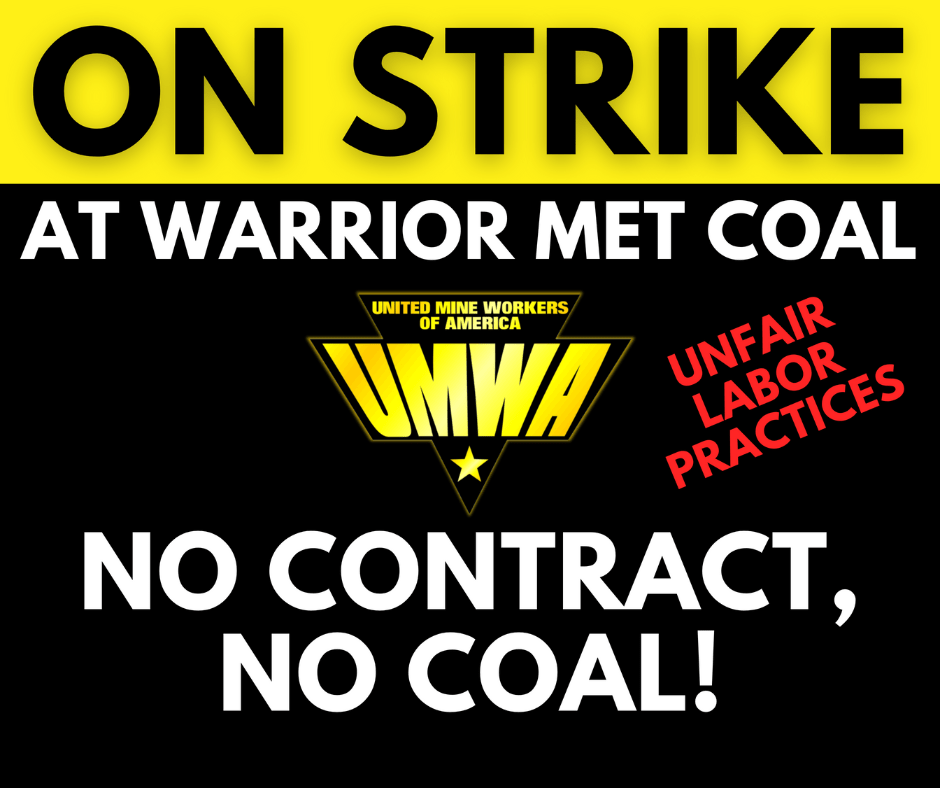 The union had agreed to a settlement of charges in June 2022, to save members and families from days of hostile questioning and arguments by company lawyers. The cost of that settlement was expected to be close to $400,000, based on what NLRB Region 10 told the UMWA’s lawyers. But that’s not what happened. The damages assessed in the July 22 letter came to an incredible $13.3 million.

“Is it now the policy of the federal government that unions be required to pay a company’s losses as a consequence of their members exercising their legal rights as working people?” President Roberts said. “This is outrageous and effectively negates workers’ right to strike. It is a slap in the face to every worker who stands up to their boss anywhere in America. It cannot stand.”

It did not. On September 19, the union was notified by NLRB Region 10 that it had revised the damage calculations to a number that conformed to the original amount Region 10 had indicated would be assessed.

“We appreciate that NLRB Region 10 took another look at the damages it had initially assessed and recognized that the number should be in line with what they had initially indicated would be charged,” said President Roberts.

A spokesperson for the NLRB said the recalculation was a result of a consideration of applicable case law, the settlement terms, and circumstances, and the monetary damage claims asserted by the parties.

Solidarity from the American Labor Movement

In a statement made on August 5, the International Brotherhood of Teamsters announced that they unequivocally rejected the initial ruling by NLRB Region 10.

“The Teamsters proudly stand with our brothers and sisters of the United Mine Workers of America to combat this assault on American workers,” said Teamsters General President Sean M. O’Brien.

“Are we simply going to strip hardworking Americans of their ability to organize and of their freedom to strike corrupt employers? At what point is the federal government going to intervene to actually protect working people?” O’Brien said. 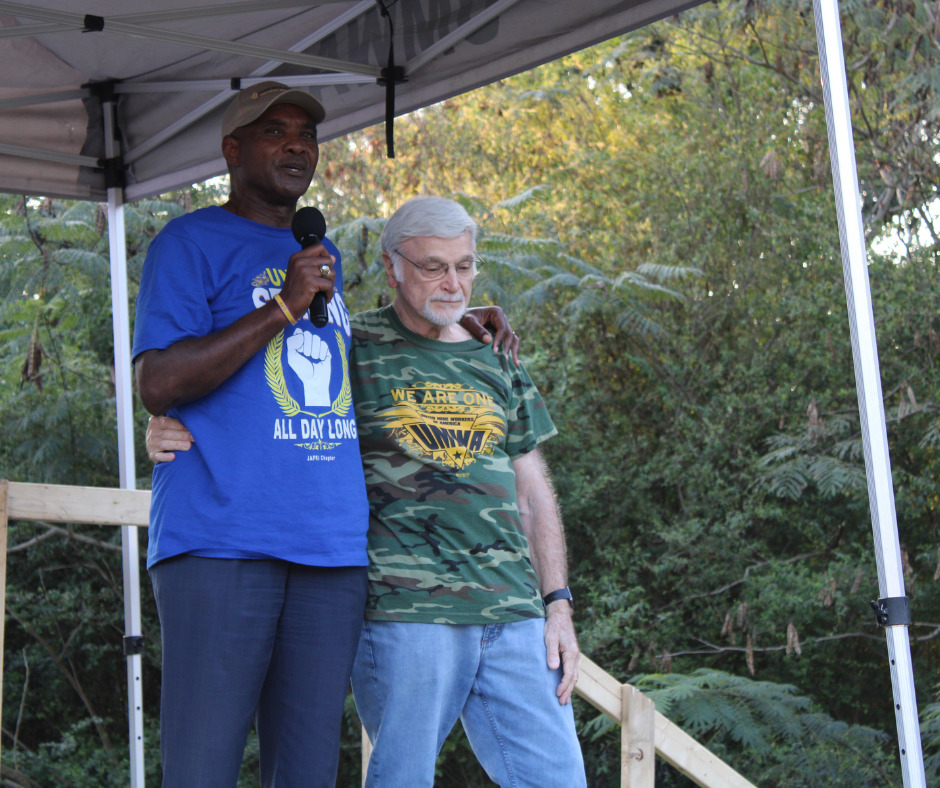 Teamsters General Secretary-Treasurer Fred Zuckerman expressed his dismay with the ruling. “Should this ruling by Region 10 be upheld, every American worker is on notice that the federal government of the United States has turned their back on you,” Zuckerman said.

“The ability to strike a ravenous employer, once, an assured protection for Americans to fight for better working conditions, would be on the chopping block if this decision isn’t reversed. There is no other way to look at it. The NLRB is simply wrong in this misguided ruling.”

The Amalgamated Transit Union (ATU) denounced the unconscionable decision by the NLRB to unfairly penalize the UMWA in a press release on August 11.

“The workers at Warrior Met have been out on the picket lines for well over a year due to the company’s intransigence at the bargaining table,” said ATU International President John Costa.

“If this recent decision by the NLRB to award $13.3 million to Warrior Met from the UMWA is left to stand and employers are allowed to finance their strike strategies with union funds, it will encourage more employers to adopt Warrior Met’s ruinous bargaining strategy.

“This decision would undermine the fundamental right of workers to strike in their own defense. The ATU and every other union in America are shocked by this decision. Unions cannot be required to pay for loss of production or service during a strike.”

The National Association of Letter Carriers (NALC) voted at its August 10th convention to send $25,000 to the UMWA Strike Aid Fund. The NALC vowed to stand with members of the UMWA in our efforts to fight the NLRB ruling.

Expressions of support were also received from the American Guild of Musical Artists (AGMA), the International Federation of Professional and Technical Engineers (IFPTE), and other unions. 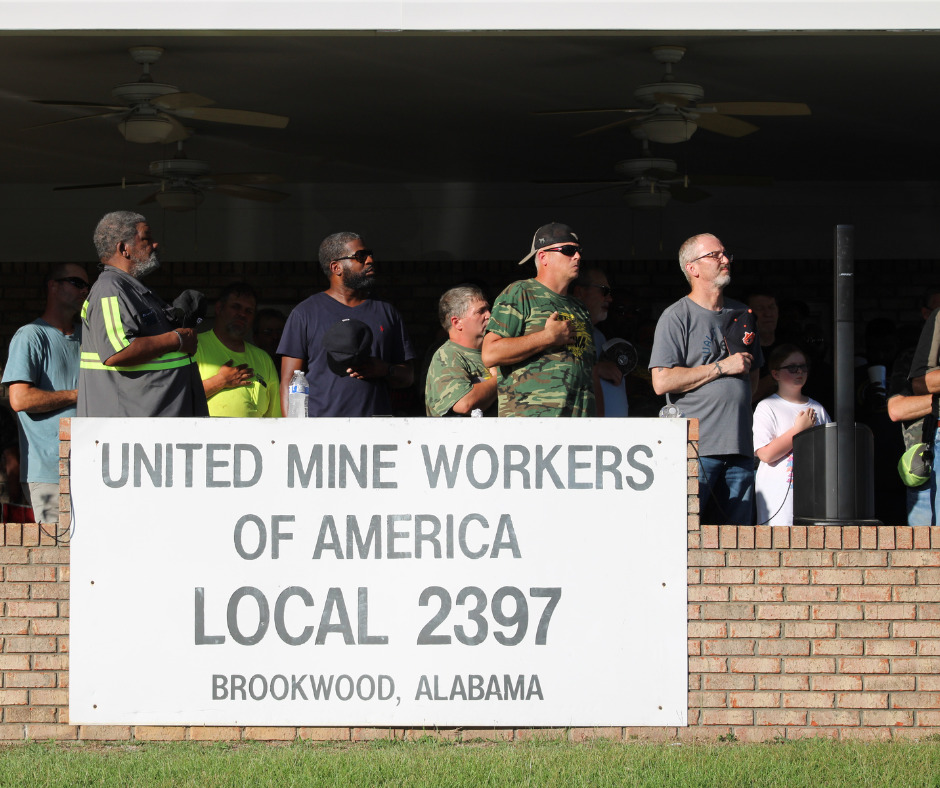 Mcghee has worked at the No. 7 Mine in Brookwood for 17 years. When asked about the determination to win the strike, Mcghee said, “The company thinks they can break the union; that’s what they want. The strike has been a real struggle but with the solidarity from all of the other unions that have supported us, our community, and my fellow union brothers and sisters, solidarity will prevail. It always has.”

It seems as though Warrior Met does not care that the amount of money they have spent over the last 17 months to try and defeat the strike is money that could have been used to END the strike. But when a company is worth billions and turns its back on the very workers that made them rich, why should anyone expect anything less?

“Solidarity has been key in our fight against Warrior Met,” said Secretary-Treasurer Sanson. “If the company thinks they can defeat the UMWA, they are sorely mistaken. We are fighting for the dignity the workers deserve, and we won’t stop until we have done just that.

“Warrior Met has made it abundantly clear that they don’t want to end this strike,” Sanson said. “At the beginning of September, they said they would not allow 40 of our striking miners to return to work. They are making demands that just simply fly in the face of bargaining in good faith.”

Even though at every turn, the NLRB seems to be siding with the company, the UMWA filed other unfair labor practice charges after Warrior Met sent a letter demanding to fire 40 workers without due process.

In response to Warrior Met’s letter, President Roberts said, “I would note that the list of names provided by Warrior Met includes the majority of leaders in every UMWA local union that is on strike. It also includes a disproportionate number of African-American members.

“Warrior Met has callously prolonged this strike for months, needlessly punishing these strikers, their families, and the Alabama communities where they live. Warrior Met now wants to wipe out the union’s local leadership and attack our union’s diversity. 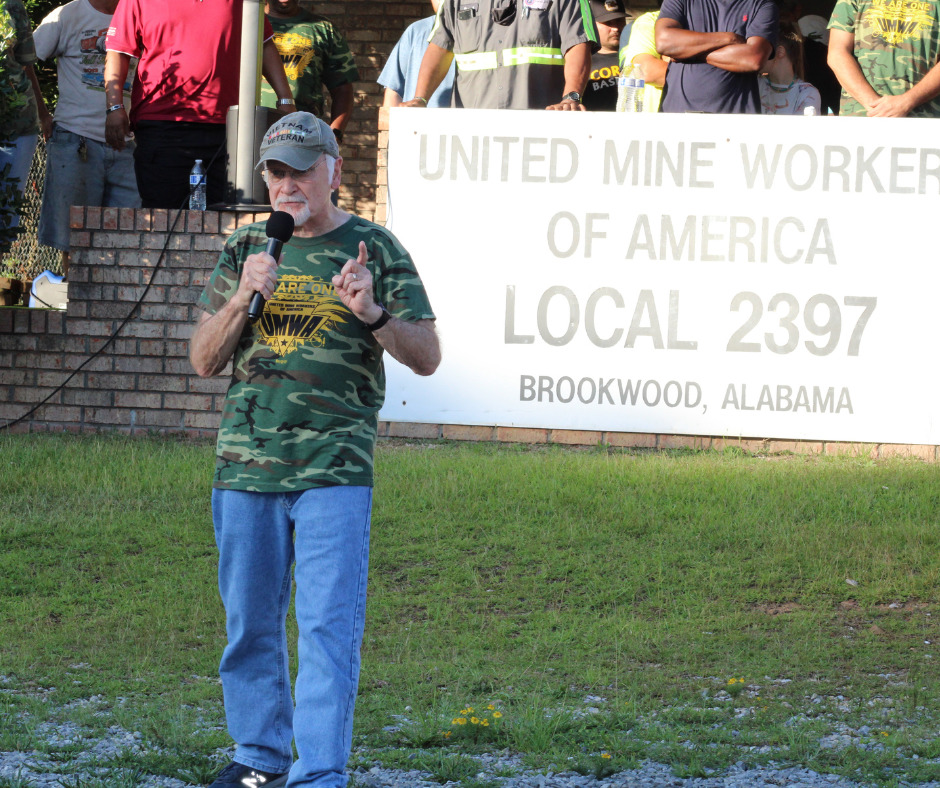 “Perhaps the Wall Street, “greed is good” mentality of Warrior Met upper management has deluded them into believing this action will intimidate the membership into submission. That would be a serious miscalculation,” Roberts said.

No Turning Back! No Backing Down!

After a year and a half on strike and the flip-flop decisions by the NLRB, members and their families on strike received a solid boost in morale and some unexpected support from none other than Tom Morello, internationally acclaimed guitarist and the leader of the band Rage Against the Machine. He attended the September 14 solidarity rally and played for the crowd. Earlier in the day Morello visited the picket lines and helped out at the UMWA Auxiliary.

Morello is a lifelong advocate for workers’ rights and is a member of Los Angeles Musicians Local 47. Morello’s family were coal miners. His great-grandfather and four brothers worked in the Marseilles mine in central Illinois their entire lives. 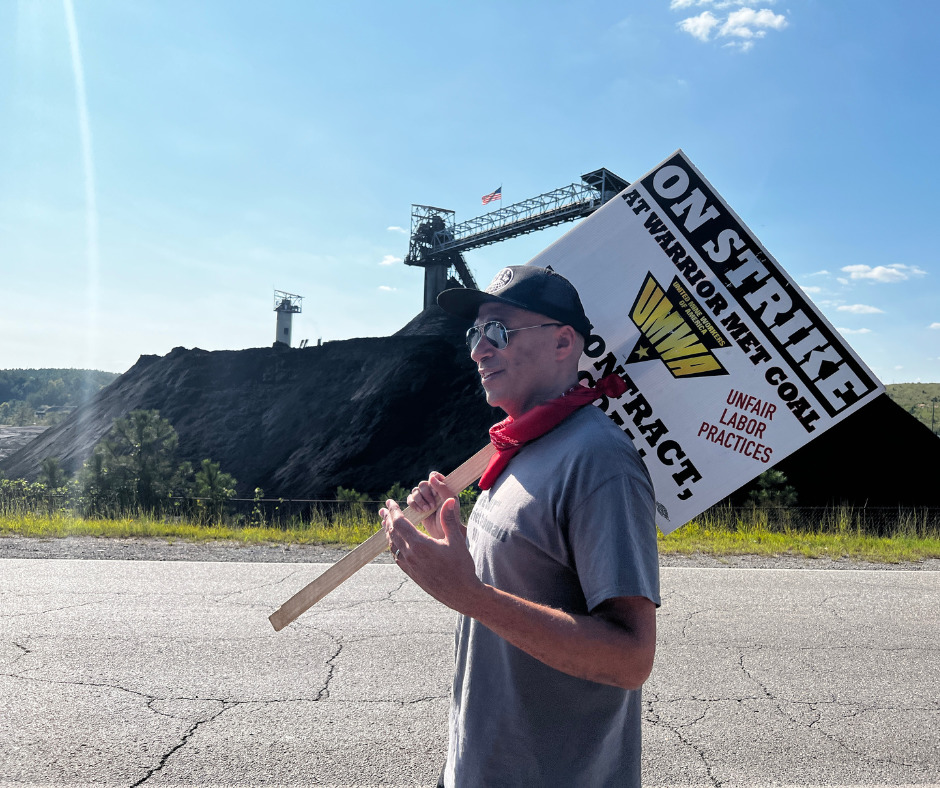 One of the things that inspired Morello was the unwavering determination of the miners on strike. He recognized how devastating it has been to them and their families and was impressed to visibly see UMWA members ready to hold out forever against Warrior Met if that’s what it takes to win.

Morello spoke with one striking miner who told him his story of wanting to retire but was in the strike until we win. That miner told Morello he wasn’t a radical but just wanted a decent life for his family. Morello said that was the most radical thing in the world to want.

“If Warrior Met thinks we are going to back down, they can think again,” said President Roberts. “We’ve got support all across the world, and we’re not backing down, we’re not turning around, and we’re not going anywhere until our members get the fair and just contract they deserve. Let’s get this done.”