We are Going to Washington, D.C. – Together we will win this Struggle

“We have been patient and respectful, but we have also been abundantly clear in our efforts to force both the coal operators and the government to fulfill their Promise of Cradle-to-Grave health care and pensions they made to miners in 1946. We have been successful in forcing the operators to set aside money to pay for retiree health care, but those funds will be depleted for many retirees and their families before the end of the year. There must Congressional action on this life-and-death issue immediately. That’s why every UMWA member, their family and friends must get on a bus and Rally on the law of the U.S. Capitol on September 8.” – President Roberts 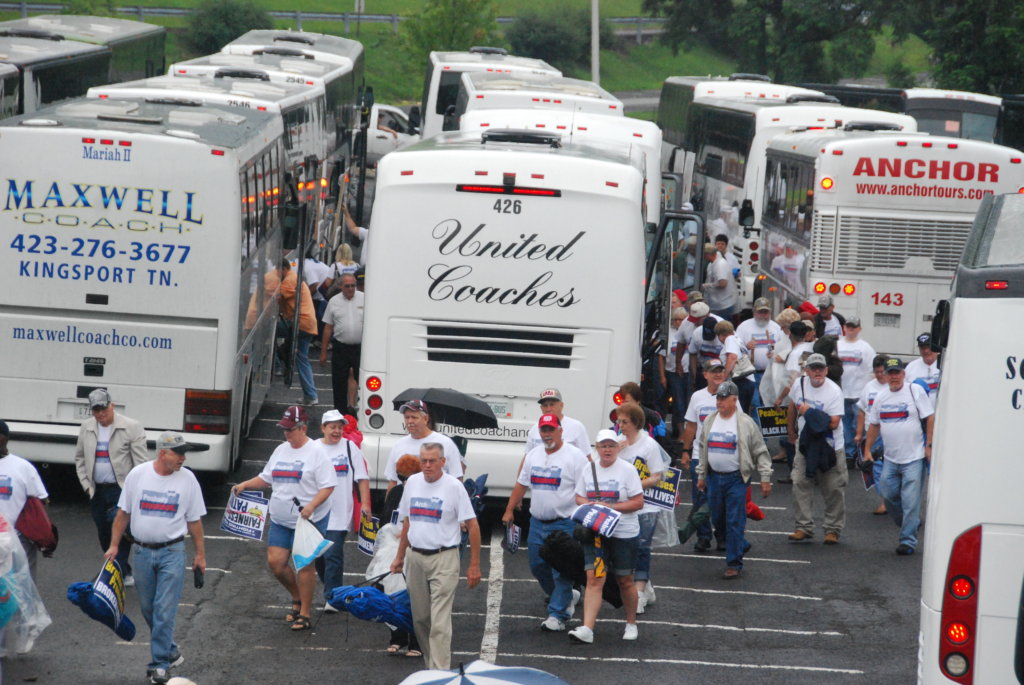 UMWA members exit buses on July 9, 2013 in Fairmont, WV during one of the many Fairness at Patriot rallies. “The membership of the Union has always been willing to do whatever is necessary to help their Brothers and Sisters. If that meant traveling hundreds of miles on buses, they did. There is no doubt in my mine they will answer the call on September 8th and arrive in Washington, DC in record numbers.” – President Roberts

The United Mine Workers of America (UMWA) has been on the move since early 2012 to preserve the health care and pensions of thousands of members across the United States when a rash of coal company bankruptcies began. For everyone who participated in the rallies in St. Louis and Creve Coeur, MO; Charleston and Fairmont, WV; Henderson and Lexington, KY and at the EPA building in Washington, DC; the journey for retirement security has been challenging. Likewise, the Union understands the concern and frustration of every member, spouse and family member who were unable to attend these events because of physical limitations or illness, but shared in those efforts with your support and prayers. There is no question that the Union’s efforts to date have ensured that every retiree or family member due these benefits continues to receive what they have earned. The UMWA has truly been blessed with the most unselfish and dedicated membership in the Labor Movement. There can be no doubt that your determination and willingness to fight for one another continues to preserve the promise of health care and pensions for miners and their families. 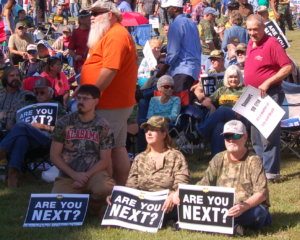 On October 14, 2015, thousands of UMWA members and their families rallied in Bessemer, AL. The UMWA had hopes that the legislation to satisfy the governments obligation to miners and “Keep the Promise” soon would become law. Unfortunately, the legislation was killed in the waning hours of 2015. “No other Union membership has faced more adversity than the women and men of the UMWA. But we are still here. And we will win this fight.” – President Roberts

“For many of us the continuing battle to secure the health care and pensions we have earned, while upholding our end of the Krug-Lewis Agreement of 1946, seems like a never-ending struggle,” stated President Roberts. “We have worked in the miens to help build, power and sustain our nation through the industrial revolution and countless wars. We have witnessed firsthand the hazards of an industry that steals our youth and ruins our health, while also weighing heavy on the hearts of our families. We have done what was required to meet our obligation to receive the benefits promised by the United States government. The health care and pensions we are demanding have been paid for by our seat and blood, and we will never end our fight until justice is achieved.” 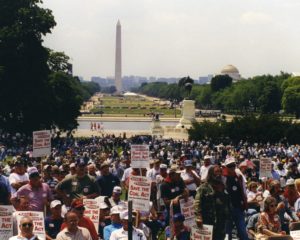 In May of 2000, more than 10,000 UMWA members, their families and supporters gathered on the lawn of the U.S. Capitol to demand that Congress “Save the Coal Act.” After more than 16 years, the UMWA will return to Capitol Hill to demand Congress live-up to its Promise and pass The Miners Protection Act.

While the permanent fix to the problems that threaten the pensions and health care of the active and retired members is still within our grasp, it has not yet been achieved. However, the ultimate goal of having Congress fulfill the Promise of 1946 is, after more than four years, still waiting for action by these elected officials. While the solution to the problem must be voted on in the U.S. House of Representatives and Senate, it is obvious that only unrelenting pressure by every UMWA member, our allies in the Labor Movement and friends in Congress can make that vote a reality. This will be the final opportunity for Congress to act before tens of thousands of UMWA members and their families lose the health care benefits they earned through years of sacrifice and labor in the nation’s mines. It is also necessary to prevent the 1974 Pension Plan from becoming insolvent or suspension of pension payments.

Join the UMWA in Washington, DC to Tell Congress to Keep America’s Promise!