On February 20, 2019, UMWA Members from across Alabama began arriving at Kelly Ingram Park in Birmingham, Alabama. The Park was named for Osmond Kelly Ingram, a local firefighter, who was the first U.S. sailor to be killed in World War I. 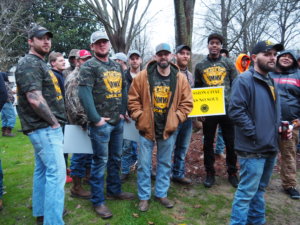 He was posthumously awarded the Congressional Medal of Honor for his valor. Located just across the street from the historic Sixteenth Street Baptist Church, where four young African American girls were killed by a bomber.
The Park later became a staging ground for large scale demonstrations, mostly by high school students and children, during the Civil Rights Marches of the 1960’s. In May of 1963, Public Safety Commissioner, Eugene “Bull” Connor, an ardent racist, confronted the young demonstrators, threatening mass arrests, before ordering police officers and firefighters to attack the crowd with police dogs and firehoses. The demonstrations in Birmingham forced the city to end public segregation and helped to ensure the passage of the Civil Rights Act of 1964.

Coming to Ingram Park was Necessary

“The decision to conduct the rally and stage the Union’s march to the federal courthouse at Ingram Park was not an accident. This location has significant meaning, both in the history of the Civil Rights Movement and in the struggles we face today. Let there be no mistake about it, we as a Nation, are not where we need to be with regard to treating all of our citizens, no matter their religion, race or ethnic background, equally. It is with this in mind that we came to Kelly Ingram Park to demonstrate against the abuse of workers by their employers and the courts. As we walked in the footsteps of those brave souls that came before us, we recognize that together we will overcome the inequity, bitterness and hate that must be finally stricken from all aspects of our society.”

The Crowd Begins to Gather

Shortly before 6:30 a.m., UMWA Members, along with their families and supporters, began to fill in the grassy area in front of the stage at the Park. The Union called a Memorial Day at all UMWA operations in District 20 so active Members could attend the events. By 7:00 a.m., over 1,000 people, holding signs, protesting the expected ruling by the bankruptcy court allowing Mission Coal Company to dump its obligations to retirees and tear up the Collective Bargaining Agreement with the Union, filled the area in front of the stage. 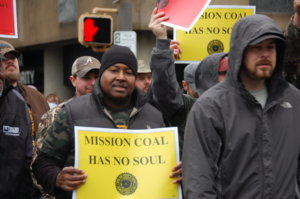 “I am sure each of you have other places you would rather be, even on a chilly rainy day, then here in downtown Birmingham said International District 20 Vice President Larry Spencer. “It is truly gratifying to see so many of you understand the importance of coming here to show your solidarity and dedication to one another. Standing together, we will be able to overcome whatever rulings the Judge in the bankruptcy court, just down the street, makes today. Looking out at this crowd, I see young miners and retirees from every UMWA Local Union in Alabama here today.

More importantly, I see a group of Union Members prepared to do whatever it takes to secure the benefits the pensioners have earned and protect the lives and income of active Members. I am grateful to represent such a diverse and selfless group of Union Members. Together we will defeat those who seek to turn their backs on working people and we will preserve our way of life. God Bless you and God Bless the UMWA.”

From the Rally to the March

Despite drizzling rain and winds that made the 40-degree temperatures feel much cooler, the Members stood shoulder to shoulder to salute the flag and then stood silently to honor their departed Sisters and Brothers. The crowd remained respectful, but the undercurrent of uneasiness about the decisions that would be made in the federal courthouse later that day was apparent. The gathering was well aware that the bankruptcy Judge would give the company everything it was asking for. They were just as certain that the fight for justice rested with them and they were unwavering in their determination to “Keep the Promise.” 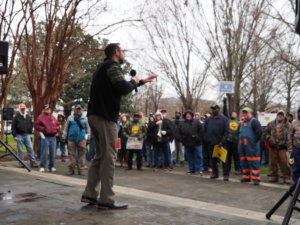 “Brothers and Sisters, your presence here today reaffirms the words of John L. Lewis, you are the shock troops of the American Labor Movement,” stated Secretary-Treasurer Allen. “I don’t know that we have ever faced so many obstacles in our Union. Most other organizations would have thrown up their hands and decided the odds were too great and the battle was lost, but never the Members of the UMWA. We may have become far too familiar with “justice” as it is dispensed in U. S. bankruptcy court, but we have never been afraid to stand up to the law when the law will not stand up for us. Cecil E. Roberts is one of my heroes, because he stands resolute behind the idea that when the Halls of Congress, the statehouses and the courthouses fail to deliver justice, we will seek justice in the streets. 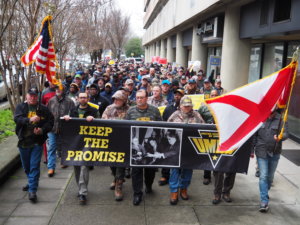 The UMWA will prevail in its struggle for fairness and dignity because of your determination, and your desire to protect each other.”

Standing behind the UMWA Krug-Lewis banner, along with three International Vice Presidents; Larry Spencer, District 20; Gary Trout, District 17 and Don Barnett, At-Large International Vice President, Secretary Treasurer Allen led the march out of Ingram Park and onto 5th Street. As the camo clad miners marched through downtown Birmingham headed for the courthouse, the procession filled the entire blocks between 16th and 18th Streets. The march ended at the front steps of the United States Bankruptcy Court for the Northern District of Alabama just before the building was opened to the public. Chants of “WE ARE UNION” and “U.M.W.A.” echoed up 5th Street. 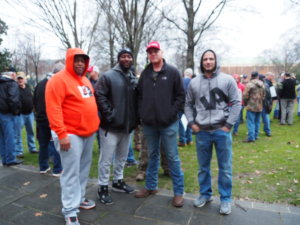 At 8:00 a.m., the doors to the bankruptcy court opened, and Secretary-Treasurer Allen, along with miners and their families, began passing through the metal detectors, leading to the hearing and overflow rooms to listen to the proceedings. Late in the afternoon, Judge Tamara 0. Mitchell issued her decision to relieve Mission Coal of all its obligations to UMWA Members and their families. Not an unexpected ruling, but painful nonetheless.

Since the Judge’s ruling, several bids have been placed before the court to purchase Mission Coal’s operations. At the time the Journal went to print, the court announced that Murray Energy was the successful bidder to purchase the company’s assets. The UMWA will begin negotiations for a Collective Bargaining Agreement as soon as the court makes a determination.