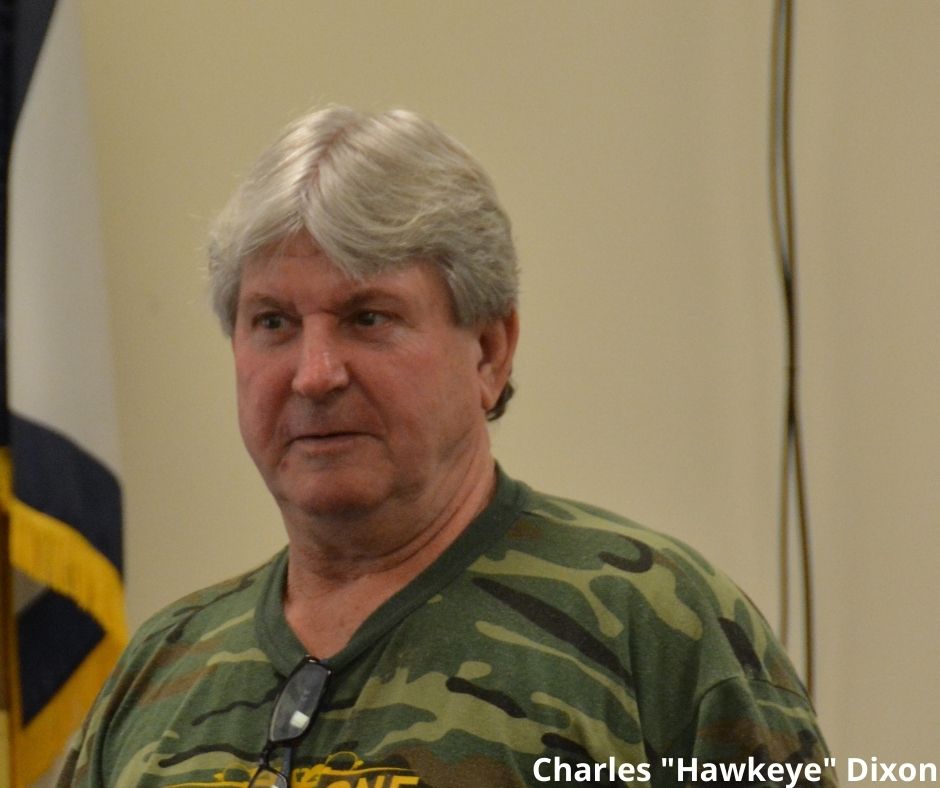 Local Union 1440 and District 17 Member Charles “Hawkeye” Dixon began his mining career in March of 1971 at the Island Creek No. 14 Mine in Nicholas County, West Virginia and continued working there until April of 1976. “I worked in lowcoal, about 36 inches,” said Dixon. “It was grueling work, but I knew I had the union to support me each and every day I went underground. I always felt safe because I knew the union had my back.” After leaving Island Creek, Brother Dixon spent one year at the ABC Coal Company and from April of 1978 until October 1, 1984, he was employed with the Pike County Coal Company in eastern Kentucky until he was terminated during the selective strike in October of 1984.

After being terminated during the selective strike, Brother Dixon became an International Representative for the former District 30 in June of 1985. Hawkeye was elected to the International Executive Board from 1985 to 2004. After 33 years of service to the UMWA, Brother Dixon retired on December 31, 2004. “Hawkeye’s dedication to the union didn’t stop when he retired,” said President Roberts. “He has been a devoted and loyal member of our union for more than four decades now. Anything this union has ever asked of him, he has wholeheartedly given it his all. His tireless hard work, devotion and love for this union is unwavering. The Union is blessed to have someone who has dedicated their entire working life for the benefit of others.”

Upon Brother Dixon’s retirement, he attended rallies all across the country, including St. Louis, Missouri, Charleston, WV and Washington, DC. He has walked the halls of Congress over the past five years fighting for retiree healthcare and pensions they earned over a lifetime of backbreaking work in the Nation’s coal mines. As of December, 2019, our retirees can now live out the rest of their lives knowing that those benefits are secure. “At every turn, Brother Dixon has been there to show his undeniable support to help every member of this union,” said Secretary-Treasurer Allen. “Whether he was called upon to be a bus caption traveling to a rally or serving as a local union president or speaking with members of Congress, he has been there every step of the way to support every brother and sister of this union.”

“No one can ever question Brother Dixon’s dedication to the United Mine Workers, that’s for sure,” said International District 17 Vice President Brian Lacy. “He was very active in COMPAC this past election year, and he has truly devoted his entire life to the labor movement and works day in and day out to represent his fellow brothers and sisters. He has always supported the union and its members.”

Brother Dixon has been the Financial Secretary for Local Union 1440 since 2009. “We have a beautiful Local Union Hall in Matewan, West Virginia,” said Brother Dixon. “We have anywhere from 50 to 60 attendees at each of our local union meetings. I enjoy helping the membership and doing anything I can to assist them. I love doing it, and wouldn’t have it any other way.”

As well as his involvement with COMPAC, he also serves on the Organizing and Pensioner Leadership Committees. “Hawkeye has been there every step of the way in every struggle we have faced,” said President Roberts. “When you have someone working just as hard as the day he started working in the mines, that’s loyalty, and I’m very proud of everything my friend and brother has done for the United Mine Workers of America.”