The trio said the miners employed by the Alabama-based coal company are striking to win better pay and benefits from a job that requires them to work in “extremely dangerous” conditions.

“As we hope you understand, the mines in Alabama run 24 hours per day. Workers can face termination for missing more than four days of work,” Sanders, Warren and Baldwin wrote in a letter dated Thursday that was obtained by CNBC. “Given BlackRock’s stake in the company and your position within BlackRock, we are asking you to do the right thing.”

Some of BlackRock’s most popular products are its index funds, investment vehicles that allow clients exposure to a portfolio constructed to match the components of a specific financial market index. In other words, those funds are not actively managed.

Such products allow investors an easy and cheap way to put money in a fund that will offer performance almost identical to a popular market index, such as the S&P 500. More than a dozen BlackRock index funds owned equity in Warrior Met Coal at the end of 2021.

Separately, each fund owns a fraction of the coal company. But combined across all its many funds, BlackRock controlled about 13% of Warrior Met Coal stock at year’s end, making it the company’s largest stakeholder, according to a FactSet analysis. 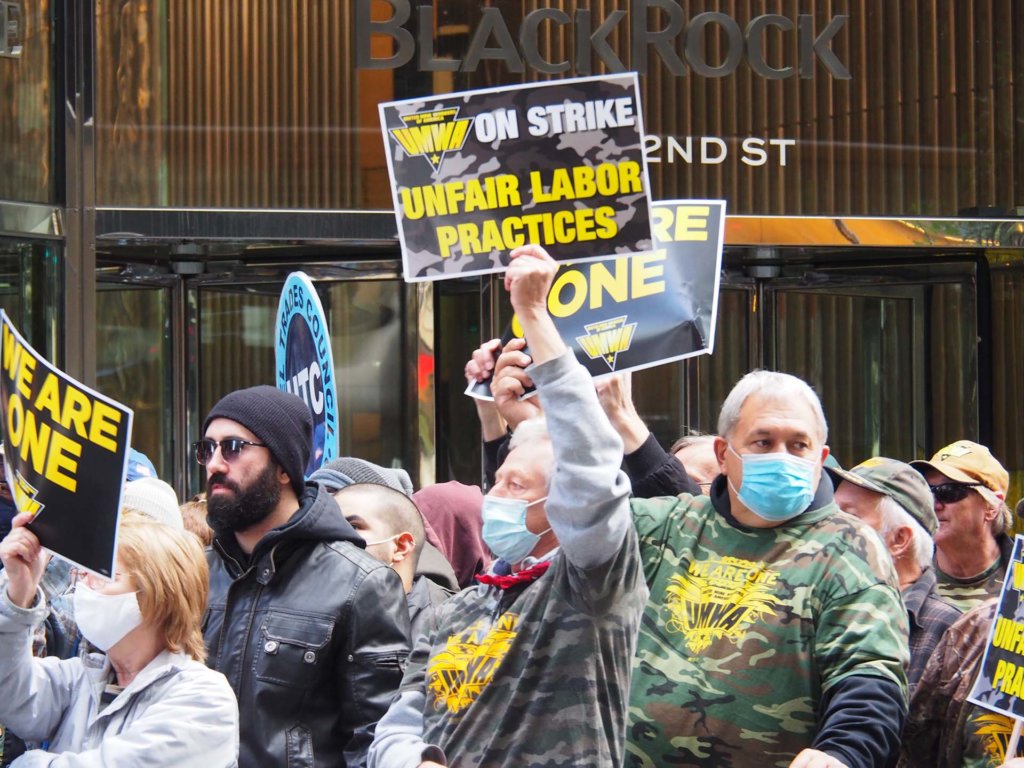 “Mr. Fink: Our request to you is simple,” Sanders, Warren and Baldwin added. “BlackRock’s Board must publicly demand that Warrior Met negotiate in good faith and agree to a reasonable contract that treats workers with dignity and respect.”

The timing of the letter appeared intentional and designed for maximum impact given that BlackRock is scheduled to publish its quarterly earnings report later Friday morning. Representatives for BlackRock and Warrior Met declined to comment for this story.

About 1,000 workers represented by the United Mine Workers of America have been on strike at Warrior Met Coal since April 2021. But the strike’s beginnings can be traced to 2016, when Warrior Met bought the mines from bankrupt Walter Energy.

As part of the corporate restructuring, the coal miners agreed to a $6 an hour pay cut and a “substantial” reduction in their health and retirement benefits, according to Sanders, I-Vt., Warren, D-Mass., and Baldwin, D-Wis.

But since the company’s rebound from bankruptcy and return to profitability, its workers have not had their compensation restored as promised, Sanders told CNBC.

“Instead of providing the kind of wages and benefits that the workers need and are entitled to, what is being offered is a totally unsatisfactory contract,” Sanders said Thursday afternoon. “We’re saying to Mr. Fink, ‘Do the morally right thing.’ What we’re asking for is: ‘Tell the company executives to sit down and negotiate a fair contract with the union.’”

This isn’t the first time Sanders and Warren have needled Wall Street titans to support workers at major investments.

It’s not unusual for those seeking changes in the corporate universe to beseech Fink.

BlackRock manages more than $9 trillion, making it by far the largest money manager in the world. The colossal pool of capital makes Fink one of the most powerful investors and empowers him to pitch serious campaigns against company managers or directors who don’t respect his requests.

Unlike many money managers who are careful not to upset clients, Fink has over the years made climate change his central political cause. He has for years encouraged corporate executives to reduce carbon emissions and shrink their environmental footprints.

Fink took his campaign a step further in 2021 when he called on all companies “to disclose a plan for how their business model will be compatible with a net-zero economy.” He added at the time that his firm planned to change its investment process and how its nonpassive funds could dump holdings that don’t adhere to its climate goals.