Remington Arms workers on layoffs, loss of benefits: ‘Apparently I wasn’t worth anything’ 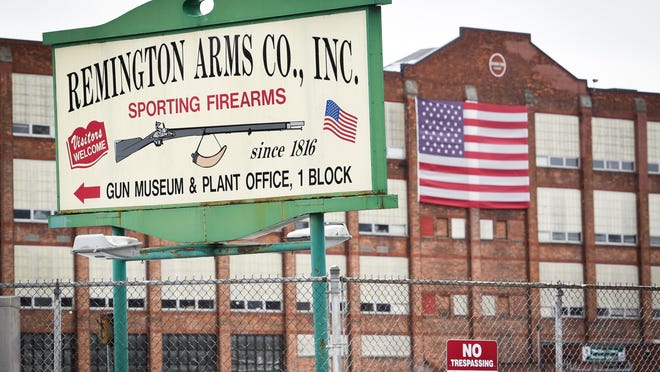 ILION — It was through a voicemail that Jeff Madison learned that he, and hundreds of other workers with the Remington Arms plant in Ilion, were laid off.

Remington Outdoor Company announced the move Friday, terminating the employment of the Ilion plant’s 585 workers by Monday, while cutting off their health care and other contractual benefits at the end of the month.

The company also said Remington would not pay severance and accrued vacation benefits — despite the terms of a collective bargaining agreement with union employees, according to the United Mine Workers of America (UMWA).

The layoffs are the latest chapter for Remington workers in Ilion, who faced uncertain futures as Remington Outdoor Company assets were auctioned off to individual bidders amid the company’s latest bout with bankruptcy. The sale of the Remington plant in Ilion to the Roundhill Group, LLC was approved late last month in federal bankruptcy court.

Representatives from Remington and Roundhill could not be reached for comment Monday.

Amid the legal feud, Madison — president of Local 717 — and Remington’s other workers are coping with the immediate fallout.

“I’ve been there 19 years,” Madison said. “Apparently, I wasn’t worth anything. They don’t want to abide by the terms of the contract.”

Madison was joined Monday morning by several other UMWA members at union headquarters on First Street in Ilion.

Martin Seamon commented that he just wants to see the new owners get the Ilion plant up and running so he can get back to work. Chris French agreed.

Union members are concerned with the loss of medical benefits. By law, workers can continue their health insurance coverage through COBRA (Consolidated Omnibus Budget Reconciliation Act).

The elimination of benefits, including disability, makes for additional problems for employees, said Jackie Sweeney, recording secretary for Local 717. She spoke with an employee who was on disability after undergoing heart surgery two weeks ago.

French said some are blaming the new owners for the decision to eliminate benefits, but that is not the case. The Remington Outdoor Company made that decision.

As part of the announcement, a Remington Arms representative advised workers to make appointments to pick up personal belongings and return any company property.

When asked about the number of vehicles in the Arms parking lot Monday, Seamon and French said there were still salaried workers at the plant along with 22 hourly employees who handled maintenance, plumbing and electrical work.

Madison said most workers have been collecting unemployment since they were furloughed at the end of September.

“A lot haven’t received their paychecks yet,” Sweeney said, adding that state and federal representatives have offered assistance through their offices.

A spokesperson for the Labor Department said the agency has been providing assistance to Remington employees since the middle of the summer, when the company filed a notice under the federal Worker Adjustment and Retraining Notification Act, which requires companies to alert the state prior to any mass layoffs.

“Our team has been working with impacted employees since the WARN notice was first filed this summer and will continue to provide support, including job placement assistance,” said Deanna Cohen, the agency spokesperson.

The state’s Jobs Express website, which culls job listings from across the state, has 2,500 current openings listed in the Mohawk Valley, Cohen noted.

“We stand ready with the resources to connect unemployed New Yorkers with these jobs,” Cohen said.

Meanwhile, the area’s state and federal representatives decried the actions of Remington Outdoor Company and express support for workers.

The Remington layoffs, along with the union’s claim that the company won’t pay out severance and vacation time, drew a rebuke from Senate Minority Leader Charles Schumer, the New York Democrat.

“Remington Arms should fulfill the commitment they made to their loyal and productive workers throughout the Mohawk Valley and pay them their rightfully deserved severance and benefits with all due speed,” Schumer said in a statement.

State Sen. James Seward, R-Milford, and other state officials said they remain in communication with the Roundhill Group about bringing Remington employees back to work. Roundhill is working to receive a federal firearms license, Seward said.

“The action is extremely frustrating and I stand with the union as they work to resolve these issues and provide workers with the benefits they have earned and deserve,” Seward said.

Both Assemblywoman Marianne Buttenschon, D-Marcy, and Assemblyman Brian Miller, R-New Hartford, said the workers are entitled to their severance and medical benefits. Empire State Development, the state’s economic development arm, has been asked to work with the new owners, Buttenschon said.

“The members of the United Mine Workers of America Local 717 have kept this business in operation and produced some of the finest firearms in the world,” Miller said. “They deserve far better than this. … Severance and vacation benefits are guaranteed to the workers and they must be honored.”

Donna Thompson is the government and business reporter for the Times Telegram. For unlimited access to her stories, please subscribe or activate you digital account today. Email her at donna@timestelegram.com.