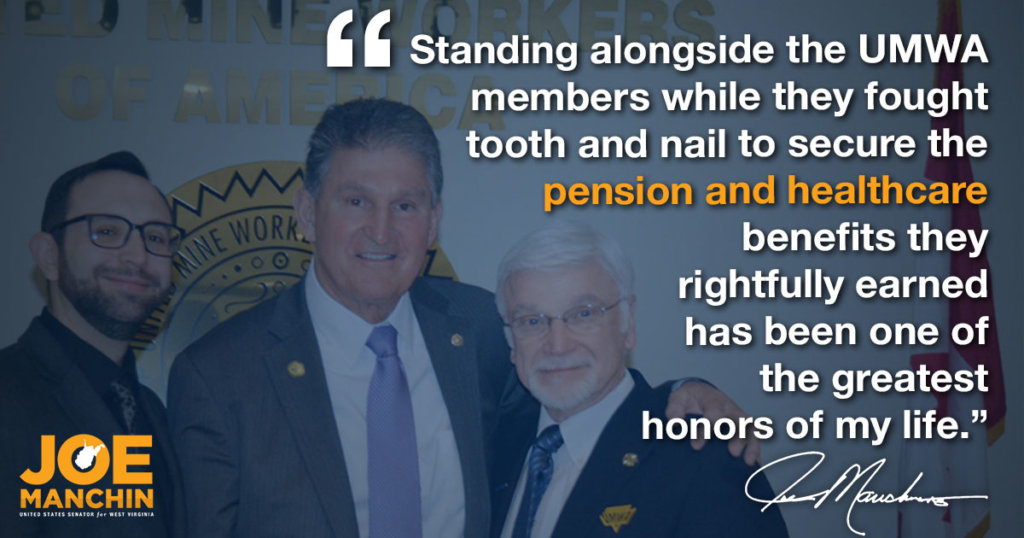 Washington, D.C. – Today, U.S. Senator Joe Manchin (D-WV) was named an honorary member of the United Mine Workers of America (UMWA). Senator Manchin received this honor for his relentless work over the last 5 years to secure pensions for 92,000 coal miners and their widows and healthcare benefits for 36,000 coal miners.

“My grandfather, Papa Joe, started working in the mines at nine years of age and I will never forget his stories of how hard he worked and fought for his fellow miners to have the dignity and respect every miner deserves. I lost my Uncle John, classmates from high school, friends and neighbors in the 1968 Farmington No 9 mining disaster. I know the hard work and risk our miners take every day to provide for their families but also the patriotic pride they have in providing our great nation with the power we needed to win wars and propel us to become the world power we are today. Standing alongside the UMWA members while they fought tooth and nail to secure the pension and healthcare benefits they rightfully earned has been one of the greatest honors of my life. Today I am humbled to be recognized as an honorary member of this great organization and to be brought in as one of their brothers. I am incredibly proud of everything we have accomplished together for West Virginia coal miners and their families and all miners across America. Thank you to Cecil Roberts and the entire UMWA membership for this tremendous honor,” said Senator Manchin.

“No one — no one — worked harder on getting this legislation passed than Joe Manchin. He has been a voice of reason on Capitol Hill since his election. Tens of thousands of miners, their families and widows have so much to thank him for, because he has literally saved their lives. We honor him today, but we will never forget what he did for us,” said UMWA President Cecil Roberts.