You must wear one at all times in all public indoor places. This does not apply to kids under the age of nine or anyone has trouble breathing or otherwise unable to remove the mask without assistance.

It also doesn’t apply when you are at a restaurant and actively consuming food or drink, or in a room alone.

All businesses will be required to post signs and ensure it’s being followed.

Governor Justice also announced staff members with nursing homes will be tested for COVID-19 twice a week, per an executive order.

Governor Justice also announced all winter sports will be postponed until January 11. This includes wrestling, basketball, and cheerleading. If you’ve already started, you will have to stop.

Governor Justice says fall sports will be allowed to be finished.

However, there will not be any midget leagues or travel ball. Those will be postponed until January 11.

“All youth sports, it does. And I hate it. I hate it like crazy and everything, but at the end of the day we have got to shut this down for a little while,” said Governor Justice.

Governor Justice has also issued another executive order including schools. He says from Thanksgiving to the following Thursday (November 26 – December 3), no one will go to school. This applies to all 55 counties, as well as public and private schools.

This gives students and teachers a seven day period medical experts say will help with family gatherings that will take place during Thanksgiving.

He says, “We’re not Texas. Or we’re not a Florida. We’re not a situation that is out of control right now. But we will be, because we are the oldest and we are the most chronically ill. And we can get there, and our hospital capacities are good, but really and truly we don’t have a major medical complex on every street corner too. “

This is a developing story.

Keep checking the WSAZ App for the latest information. 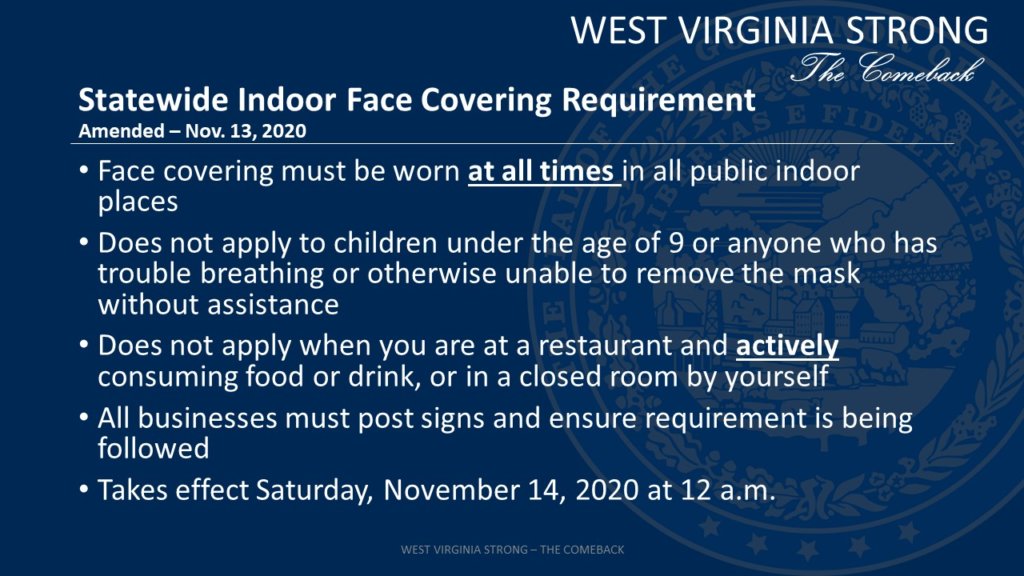