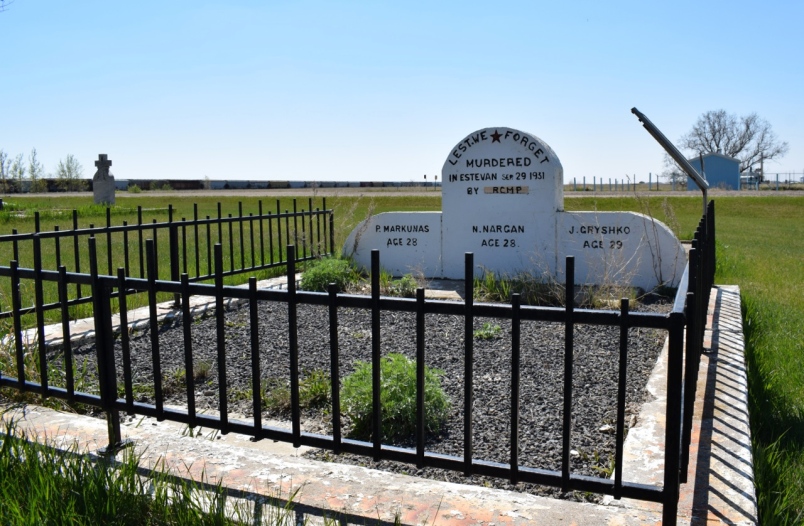 It will be 90 years this year since three miners – Peter Markunas, Nick Nargan and Julian Gryshko – lost their lives in an effort to improve harsh and often inhumane work conditions for themselves, their fellow workers and, as it turned out, thousands of other mine-industry employees all across Canada and the rest of North America.

September will mark the anniversary of the 1931 Estevan Riot, which paved the way for the union movement and also shaped the Bienfait and Estevan communities.

The Estevan Riot, also known as Black Tuesday Riot – a confrontation between the RCMP and striking Bienfait miners, took place on Sept. 29, 1931. Miners who’d been striking since Sept. 7 were demanding an improvement in wages and working conditions.

“It was a pivotal moment in Saskatchewan labour history,” Dukart said. “The miners’ goals were to set daily working hours, better working conditions, to end the company store monopoly and wage increase.”

On Black Tuesday, to gain support, miners and their families organized a solidarity parade in Estevan which was deemed illegal. As they walked from Beinfait to Estevan, they were met with lines of police officers. And as they entered the city square, the RCMP confronted rioting miners and tried to stop the procession. Shortly afterwards the RCMP opened fire on the strikers, killing the above-mentioned three and injuring numerous others.

The next day 90 RCMP officers raided miners back home. Thirteen strikers and union leaders were arrested on charges of rioting. RCMP members involved with the death of the miners were not charged.

On Oct. 6, the coal company agreed to strikers’ key demands. The minimum wage went up to $4, the company switched to eight-hour workdays, reduced rent and put an end to the company store monopoly. That agreement put an end to the strike but it was also was just the beginning of the development of the labour movement in Saskatchewan.

The work started by 1931 striking miners and union leaders continued throughout the following 90 years.

“They paved the way to lives we all live today. And that’s another reason why it’s so important to us. It was the start to better working conditions, better wages, better family time, because of reduced working hours, and freedom, really. Back in that day, they had shopped at the company store. They got their cheques, and then any money that they made in the mine, they had to spend at the company store. They weren’t free to go to local communities to spend money,” explained Dukart, who lives in Bienfait and grew up about 1 1/2 kilometres from the three miners’ grave.

He added that remembering the events of 1931 and the individuals who were strong and brave enough to stand up for their rights is key to understanding the contemporary working conditions.

That’s what started collective agreements,” Dukart said. “Slowly over the years, we just keep improving those collective agreements. It isn’t a company that gives you that stuff, that’s the individuals, they negotiated that and that’s obviously how a union is. It’s work. You form a union, you negotiate contracts, and you get solidarity and power, the more members you have.”

Those miners striking and losing their lives in 1931 changed it, not only for the generations of miners to come but for everybody else in the area and probably in many other communities.

“It goes a long way because when we improve working conditions and wages in a site, everybody in the surrounding area has to compete to keep the good workers,” Dukart noted.

UMWA Local 7606 doesn’t plan on having any big events for the anniversary of the strike this September. Usually, when they celebrate something of this importance, they try to get the U.S. union members to come over and deliver speeches. Besides, they would get the Saskatchewan Federation of Labour and Canadian Labour Congress involved, and with all these guest speakers flying in with the pandemic and borders remaining closed, it wouldn’t be realistic to get it organized.

However, they are proceeding with refurbishing the grave of the three miners in Bienfait.

“We would redo the grave, it needs some attention. So we thought we’d redo the grave and then get a nice plaque made up with the 90th year anniversary recognition on it,” Dukart said.

The plan is to start working on the grave in June and have it completed before the date of the strike anniversary in September. There is a little bit of concrete patching that needs to be done and the headstone needs to be fixed up and painted.

Bienfait Mayor Ken Bonokoski stepped up to the plate and said he wanted to help with the project. Other union members will also donate their time and the union will cover the costs.

“We owe it to them three individuals,” Dukart said.

The last recognition of the deceased miners took place during the 75th anniversary, and the plaque was put on the railing then. It got some moisture inside, and the union plans on fixing it and keeping it where it is. The new plaque will go on the other side of the railing.

Last year, the UMWA local also completed the refurbishment of the coal car, located at the Miners’ Corner by the courthouse in Estevan – the historical scene of the 1931 riot. Dave Dukart spearheaded the project.