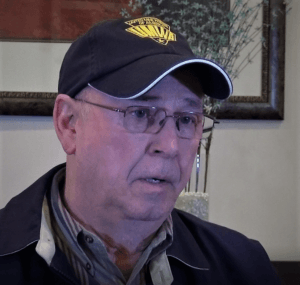 Robert “Bob” Cox, President of Local Union 9800, is not only worried about how the failure of Congress to pass the Miners Protection Act will affect himself and his family, he is also concerned about the devastation that will come to his community if 22,600 retirees and their dependents lose their health care at the end of April. “It would affect everyone in the community,” Cox said. “The drug stores, grocery stores, hospitals; they rely on business from these retired miners.” Cox currently lives in Beaver Dam, a small town in western Kentucky that is populated primarily by people involved in the mining community.

Like thousands of others, Cox was promised lifetime health care and pensions when he retired from Peabody Coal Company after 35 years working underground. “It is a hard, dirty, gruesome job, but we always lived with the promise and the thought that we would have health care and pensions for life,” said Cox. “It was what we looked forward to, because you got to have something down there to look forward to or you won’t go down there every day.”

Cox contracted coal workers’ pneumoconiosis (CWP), also known as black lung disease, as a result of his work in the mines. “I know so many people who are in a lot worse shape and are even older than I am, and their whole lives depend on their medical care and their pension,” Cox said.

You can help Bob Cox and the thousands of retirees and their dependents who will lose their health care on April 30. Contact your representatives in Congress, tell them to pass S.175 and HR179, and live up to America’s obligation to our miners.