NEW YORK, N.Y.—You take a six-dollar pay cut and what do you get? Five years older and no respect for the sacrifices you made to get your employer out of bankruptcy, say the striking Alabama coal miners who protested outside the Manhattan offices of three hedge funds on June 22. 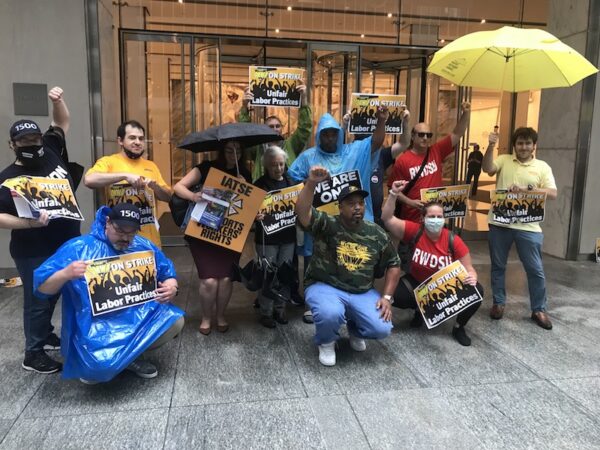 “They told us, since we bailed them out, they would take care of us,” says Brian Kelly, president of United Mine Workers of America Local 2245, one of more than 1,000 miners who’ve been on strike at two mines in Brookwood, Alabama, since April 1. But instead, he says, “they’re bringing in scabs to work and trying to get rid of the older workforce.”

Warrior Met Coal, which operates the two mines, about 15 miles east of Tuscaloosa, was bought out by a consortium of 20 to 30 hedge funds in 2016 after its previous owner, Jim Walter Resources, filed for bankruptcy, says UMWA spokesperson Phil Smith. Local 2245 then agreed to major concessions to help the company regain solvency: Along with the $6-per-hour pay cut, their health-care costs were increased from a $12 copay to a $1,500 deductible; the union had to negotiate a $25 million Voluntary Employees’ Beneficiary Association plan to continue retirees’ health care; and extra overtime pay for Sundays and holidays was eliminated.

“They’re making us work seven days a week, up to 16 hours,” says Kelly, who’s worked in the Brookwood mine for 25 years, following his father, uncles, and grandfather. “Now we’re forced to work every holiday except Thanksgiving, Christmas Eve, and Christmas.”

The company’s current contract offer, instead of restoring the $6 pay cut, is a five-year deal with a $1 an hour increase, with another 50 cents coming in its fourth year, says Kelly.

“This company has prospered,” says Dedrick Gardner, who’s worked in the mine for 13 years. “We worked a whole year during the pandemic. The mine didn’t shut.”

That brought the miners to the offices of three of the hedge funds that own Warrior Met: In the morning, they protested outside BlackRock Fund Advisors, the largest stockholder, holding 13% of the company, according to Smith. In the afternoon, they split into two groups, one at State Street Global Advisors, which owns 11%, and the other at Renaissance Technologies, which owns 4%.

Outside State Street’s Sixth Avenue offices, about 25 miners and supporters from other unions — the International Association of Theatrical and Stage Employees, the United Food and Commercial Workers, and Retail, Wholesale, and Department Store Union Local 338 — marched in an oval, chanting “No Contract, No Coal” and “Warrior Met Has No Soul.” Rain cut it short an hour early.

“These hedge funds are among several entities that invested in Warrior Met five years ago when the company emerged from bankruptcy,” UMWA International President Cecil E. Roberts said in a statement. “But they insisted on dramatic sacrifices from the workers, to the tune of $1.1 billion. The company has enjoyed revenues amounting to another $3.4 billion since then, much of which flowed into these funds’ accounts. It’s time to share that wealth with the people who created it — the workers.”

Company executives got bonuses of up to $35,000 early this year, according to the UMWA. The Brookwood miners now average about $22 an hour, the union says. Kelly says he makes about $60,000 a year.

Contract talks have made little progress since early April, when the miners rejected a proposed agreement drawn up a few days into the strike by a margin of 1,006 to 45. Smith says he doesn’t expect them to resume until after July 4.

“They really haven’t moved very far from the contract that got voted down,” says Smith. “I don’t think they got the message.”

Aside from pay, union officials say, a main dispute is that management is demanding the power to fire strikers and to give strikebreakers and new hires seniority. Earlier this month, there were at least two incidents where drivers entering the mine site in pickup trucks hit picketers. Warrior Met management responded that it has an injunction that “specifically prohibits picketers from interfering, hindering or obstructing ingress and egress.”

“They want to put the new hires and scab miners to the front of the seniority line,” says Kelly. “I’ve been there 25 years. That’s not going to happen.”

Safety has become a major concern. The foremen the new management brought in, Kelly says, came from West Virginia and Kentucky, and don’t understand the kind of mining they do at Brookwood.

The Alabama mine, which extracts a specialized variety of coal used in making steel, is much deeper than a typical Appalachian “drift mine,” he explains. Its shaft goes down 2,000 feet, and the miners have to travel as much as 10 miles to reach the coal face.

“You can’t walk out if something happens,” he says.

Mining coal at those depths also releases a lot of methane gas, which is toxic, inflammable, and explosive. In the last two years, Kelly says, there have been more “ignitions” — small fires starting from pockets of methane igniting — than he’s seen in his previous 20 years on the job.

“They are building a big potential to have something blow up,” he says.

It’s a peril he knows too well. On September 23, 2001, 13 miners at Brookwood were killed in a methane explosion.

“If you don’t run safe, you won’t run more coal,” Kelly says. “You’ve got to have air to push the dangerous gases out.”