Sen. Joe Manchin and Mine Workers Union Pres. Cecil Roberts to address energy transition and next steps for coal country

Joseph Manchin III, the senior senator from West Virginia and chair of the Senate Energy and Natural Resources Committee will join with the president of the United Mine Workers of America, Cecil E. Roberts Jr., as Roberts announces the UMWA’s principles for addressing climate change, energy transition, and government policies that affect workers in coal production and other parts of the energy sector at a National Press Club Virtual Headliners event on Monday, April 19 at 11 a.m.

This one-hour news event will stream live on the club’s website and YouTube Channel and is accessible to both the media and members of the general public free of charge.

To submit a question for the speakers in advance, put ENERGY/LABOR in the subject line and email it to headliners@press.org.

“Energy transition and labor policies must be based on more than just promises down the road.

“We want to discuss how miners, their families, and their communities can come out of this transition period and be certain that they will be in as good or better shape than they are today,” said Roberts.

“The decisions being made in Washington will determine what our union and our communities look like 20 years from now.”

Roberts has led the UMWA since 1995. He is [one of] the Vice Presidents of the AFL-CIO.

Manchin, one of the Senate’s most influential members, is often seen as a swing vote in the 50-50 Democratic-controlled Senate. 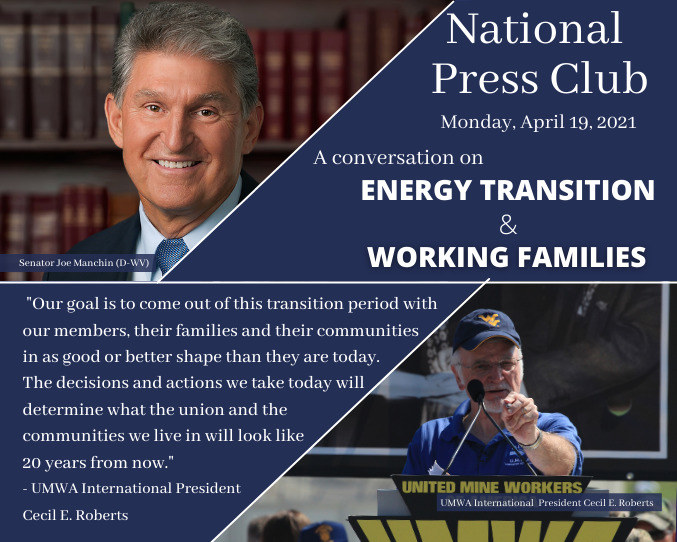