At a Massive Union Rally, the Promise of a Better South

Source: In These Times 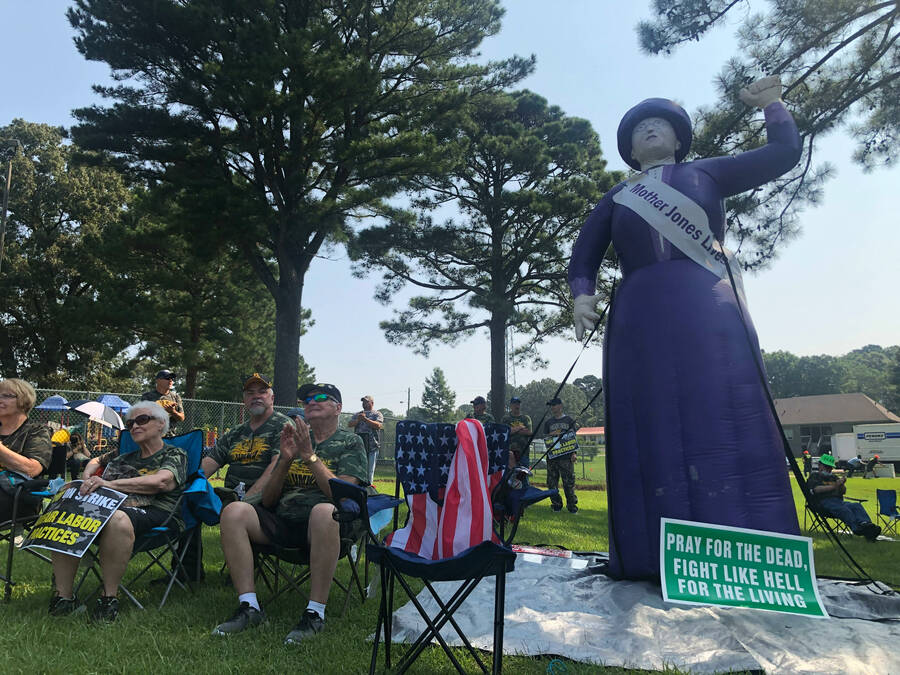 To get to the big ballpark in Brookwood, Alabama, you drive down the Miners Memorial Parkway. The road goes by the local headquarters of the United Mine Workers of America (UMWA), and close to the Miners Memorial monument, which remembers 13 miners killed in a 2001 explosion. A lot of coal miners work in Brookwood, and a lot have died here. Right now, more than a thousand are on strike there, at the Warrior Met Coal. It sits just off the same road.

On Wednesday morning, a line of buses lumbered down the winding road through the woods, and a line of pickup trucks piled up behind them. All passed the ​“We Are One” UMWA signs lining the road for miles before turning into the ballpark, where the sprawling open grass was dotted with tents and a stage. Entire families, most of them in camouflage UMWA t‑shirts, lugged their folding camping chairs and shade umbrellas out past the low white tornado shelters and down to the grass. The strike at Warrior Met has been going on for four months. But on this day, the rally was on.

Several thousand people showed up for what was billed as the ​“Biggest labor rally in Alabama history,” a claim too good to check. What was certain was that this was not a single rally for a single local of a single union. This was the entire labor movement, showing up to say that they have not forgotten a long and grinding struggle.

After the Pledge of Allegiance, the national anthem, and a reverend’s prayer to ​“change the mindset” of scabs and coal mining company owners — something even God might find difficult — the rally commenced. For hours, a procession of UMWA officials and leaders of other unions cycled across the stage, giving speeches that varied in inspirational quality. Attendees sought to maneuver their seats into the small patches of shadow that moved slowly across the scorching grass. Enormous quantities of bottled water, Krispy Kreme donuts, and popsicles were handed out from supply tents. People chatted, and prayed, and listened to various singers, and were together.

Many unions had sent buses full of supporters from all across the South. There were more than a dozen CWA members from Atlanta who worked for AT&T, decked out in red shirts. There was a gaggle of UAW members. There were Teamsters, and teachers, and government workers, all proudly in their union t‑shirts. There were union officials from Georgia and Kentucky and Tennessee and South Carolina. There were presidents of locals from other states, climbing the stage to present $500 checks to the strike fund. There was an entire tent full of longshoremen wearing custom-made white t‑shirts that said ​“Port workers in solidarity with mine workers.” They had come from Charleston, Jacksonville, and Mobile, Alabama, on a single bus that stopped in each city, collecting the comrades.

In addition to all the union member guests, at least half of the crowd was made up of retired UMWA members and their families, as if to demonstrate the ​“We Are Everywhere” slogan on all the camo shirts. These people also came from all across the country. One 76-year-old former coal miner nicknamed ​“Mouse” had taken a bus the week before from his West Virginia home up to New York City for a protest that the strikers held in front of the Blackrock headquarters in Manhattan; this week, he had taken another bus 18 hours to Brookwood for this rally. Asked why, he jabbed his finger forward and said, with force, ​“It helps my union brothers.”

Brookwood, Alabama is not a convenient place to get to, even if you live in Birmingham. The fact that thousands of people from across the country had clambered into buses for interminable trips to sit at this rally under the sweltering sun, for people they did not know, was remarkable. I spoke to many of these attendees and, to a person, the question of why they had gone to all the trouble to show up was answered as if it didn’t require any explanation at all. ​“Solidarity,” they said. ​“They supported us, so we’re supporting them.” ​“This is what the union’s about.” To take a 30-hour round trip on a bus was, for them, a no-brainer. This is what the union’s about. For one day, this was just common sense. But in the context of the United States of America in 2021, this was a rare sight to behold. 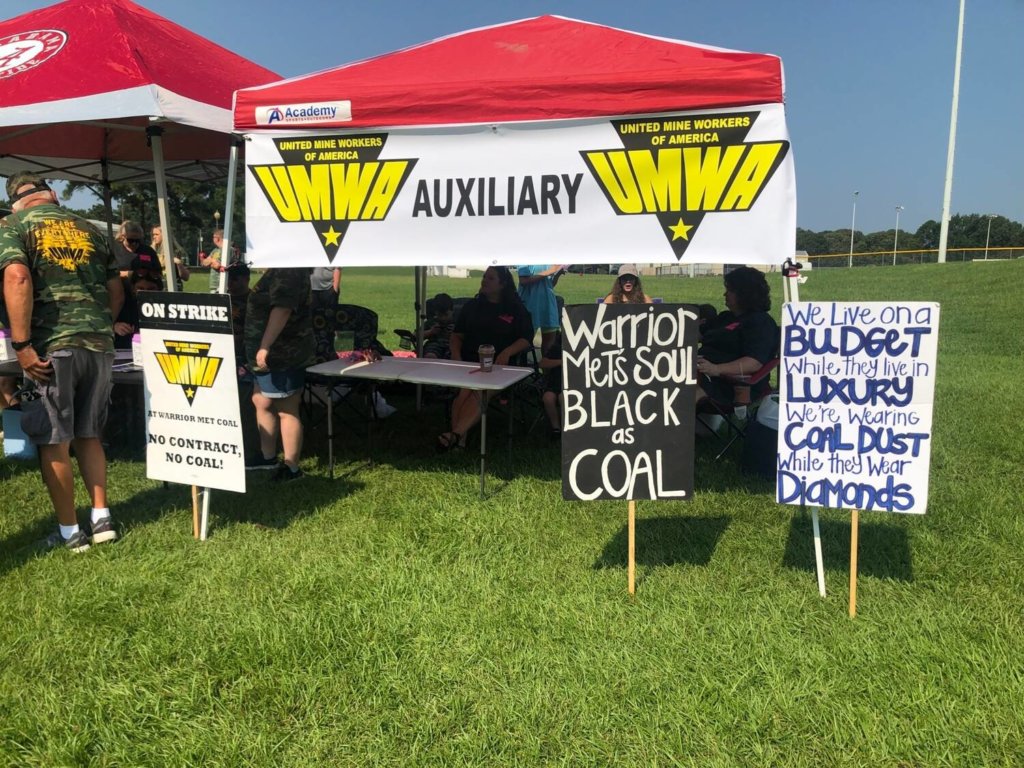 The crowd at the Brookwood rally was multiracial. Not multiracial like a fashion ad, or a painstakingly assembled corporate board, but a large group of Black and white people united for a common purpose. The UMWA miners who are on strike at Warrior Met now are an integrated group, and so their supporters in the community are integrated as well. There were both Black and white people serving as Marshals at the rally, and helping to run it, and speaking from the stage, and sitting in the crowd. The majority of the people from other unions who had shown up in support were Black. The longshoremen were almost all Black, the CWA workers from Atlanta were almost all Black, and on and on.

Many of the UMWA members in attendance, and certainly most of the older retirees, were white, religious, and Republican. The entertainment at the rally was almost all gospel and religious music. Singer after singer appeared between speeches to proclaim the glory of the Blood of Jesus. One retired miner made it a point to tell me, at the end of an interview, ​“I’m a Trump guy.” Across the grass, some of the Black CWA members from Atlanta toted ​“Strike for Black Lives” signs. At no point during the long, hot day did I see a bit of animosity — or, indeed, even a mention of political differences — between the members of the crowd. (The one exception was a single angry interloper who began pushing people and trying to start a fight before being hustled away by a large crowd of miners. I was told that he was a scab worker sent in to try to disrupt the rally. The fact that he walked out in one piece is a testament to the professionalism of the union.)

I am from the South. I was born in the South, I grew up in the South, and my entire family lives in the South. I have never in my life seen a racially and politically integrated crowd of people in the deep South, utterly united for a cause, as I did at this rally. The only things that come close are church events or football games, which I would argue lack the socially redeeming qualities of yesterday’s event. It is possible, down South, to get a racially integrated crowd where everyone agrees politically, but to get thousands of Black and white people whose politics range from strongly pro-Trump to strongly pro-Black Lives Matter together in a single place, in total unity of purpose, with virtually no conflict, and without being the explicit result of trying to assemble such a crowd to satisfy some sort of demographic diversity goals — well, that just doesn’t happen that much, ever.

This is the promise of unions. Not just better wages, or better working conditions, but a better society. Unions offer a frame for human interaction that does not otherwise exist. Our everyday experience in a society that is racially segregated, unequal, and politically polarized tells us that getting young and old and Black and white and left and right all together for something should be extraordinary or impossible; but at a union rally, where everyone’s common interest is plain to see, it becomes natural. It is only because the strength of unions within southern communities has become so rare that the sight of yesterday’s rally was so abnormal. Were there more strong unions, the South could be a very different place.

What the UMWA offers to the people of Brookwood is a vision of the world in which your enemy does not have to be someone of a different race or different political party. For those who believe in the union, there is a much more compelling enemy. It is an enemy they can see every day that they sit out on the picket line, watching cars drive by them, towards the mine. The back of the stage at the rally held a large banner with a picture of working people on it, and a header that read ​“Which Side Are You On?” One side of the banner said ​“UMWA,” and the other side said ​“Scabs.”

As the rally neared its end, a folk singer got up to perform a song he’d written to the tune of Woody Guthrie’s ​“All You Fascists Are Bound to Lose.”

“I’m gonna tell you scabs, we’re gonna win this strike,” he crooned. ​“And I’ll die a union miner, but you’ll be a scab for life.”