2021 marks the 100th Anniversary of the Battle of Blair Mountain, one of the most significant labor actions in American history.

We—museums, descendants of the RedNeck Army, labor activists, musicians, teachers, history buffs, and more—gathered in early September to host and attend a slate of events across Central Appalachia, and online. Collectively, these programs brought this proud, working-class history to new audiences in new ways.

And now, we’re excited to bring it to YOU with a short film that recaps just a few of the #Blair100 Centennial events.

The WV Mine Wars Museum led a 3-year planning process for the #Blair100 Centennial Commemoration. If these stories resonate with you, help us keep telling them!

Become a sustaining member of the WV Mine Wars Museum: www.wvminewars.org/support

UMWA miners on strike at Warrior Met Coal are going on their 7th month of striking, and the fight will continue until these miners get the contract that they deserve! This week at Tannehill State Park, UMWA International President Cecil E. Roberts reminds the crowd what all of this is for and repeats that we are NOT backing down!

The United Mine Workers were back at Tannehill State Park this week rallying for the miners on strike at Warrior Met Coal. These miners have sacrificed for years to bring this company out of bankruptcy and all they are asking for is a fair contract that they deserve! #WarriorMetsWrong

UMWA’s 16th #Solidarity rally at Tannehill State Park. We will not give up. We will not back down. Join us next week, August 25th to help us fight for justice for the miners on strike at Warrior Met. #WarriorMetsWrong

Secretary-Treasurer Sanson spoke at this week’s Solidarity Rally at Tannehill State Park. UMWA members and supporters continue to rally together fighting for the contract the miners at Warrior Met Coal deserves! #UnitedWeStand #WarriorMetsWrong

Thank you to everyone who came out this week in support of our Brothers and Sisters on strike at Warrior Met Coal. #WarriorMetsWrong and we need to stand together to get the contract our miners deserve!

On July 28, 2021, join the UMWA in New York City as we picket outside of Warrior Mets biggest investors!

August 4, 2021, the UMWA will be back in Alabama throwing the largest rally Brookwood has ever seen! #UnitedWeStand #DividedWeFall

FIGHT FOR WHAT THEY DESERVE.

Join the United Mine Workers of America, August 4, 2021 at Brookwood Ballpark to stand up to injustice! 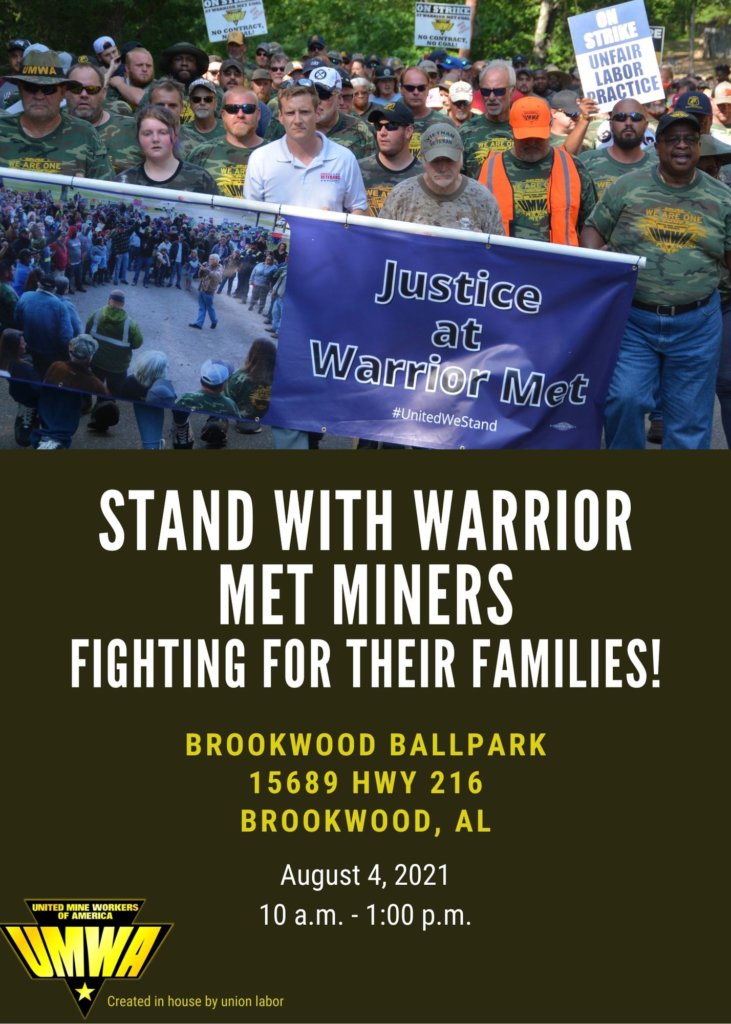 Go to UMWA.org for more information about the August 4, 2021 rally in Brookwood, AL.

The wife of a striking miner was hit while peacefully and legally walking a picket line at Warrior Met Coal here yesterday in other instance of company-inspired violence as Warrior Met attempts to intimidate strikers to return to work.