Alabama miners’ strike: ‘We are Union!’ 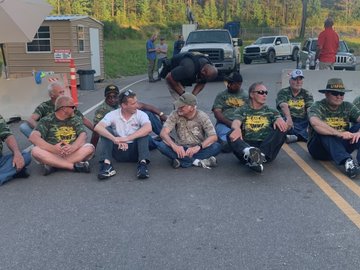 May 31 — In Brookwood, Ala., the 1,100 miners of United Mine Workers (UMWA) Local 2245 are entering the ninth week of a strike begun April 1 against Warrior Met Coal. The company has refused to meet the miners’ just demands, and the bosses brought in nonunion workers to replace the strikers. Business Wire describes Warrior as “the leading dedicated U.S.-based producer and exporter of high quality metallurgical (‘met’) coal for the global steel industry.” (Feb. 24)

Three hundred striking workers marched to Mine #7 on May 25 to confront the strikebreakers, chanting, “We are Union! UM doesn’t break!” Black strikers on bullhorns called out by name the scabs who were crossing the picket line: “Get out from behind the truck, D__! Come back where we can see you!” Mine worker unionization in Central Alabama has a tradition of Black and white worker organizing that goes back 100 years, in defiance of state segregationist law and policy.

A group of miners sat down in the road to block the entrance; eleven were eventually arrested. One miner said, “We don’t feel like we’re breaking the law, when this company is trying to destroy our people.” (perfectunion.us)

When those arrested were released later in the day, they joined a union rally in progress, where speakers included Cecil Roberts, UMWA international president, and Liz Schuler, secretary-treasurer of the AFL-CIO.

In 2016 the miners accepted a drastic $6-an-hour pay cut and sacrificed health benefits to bring the company out of bankruptcy. Management promised the cuts would be restored once the business was solvent.

In a 2020 end-of-year statement Warrior CEO Walt Scheller said: “Despite the ongoing impact of COVID-19 on met coal demand and pricing worldwide, we were pleased to be cash flow positive again in the fourth quarter and nearly break even for the year.”

But when the miners demanded restoration of their pay and benefits, the company offered a contract with only a $1.50-an-hour increase and kept in place brutal discipline and firing policies. The company contract offered nothing to improve unsafe working conditions. After walking out, the miners voted 1,006 to 45 to reject the company offer.

The miners labor in one of the world’s most life-threatening workplaces. The Brookwood mines are 1,400 to 2,100 feet underground — some of the deepest vertical-shaft coal mines in North America. In 2001, methane gas explosions and a cave-in at one of the mines killed 13 workers, including a former high school classmate of this writer.

The company’s hard line, which is keeping experienced miners out of work, is also having a damaging impact on the surrounding environment, as inexperienced picket-line crossers are expected to run complicated machinery. Nelson Brooke with Black Warrior Riverkeepers says a polluted wastewater discharge smelling of chemicals is now flowing into local creeks from Warrior Met. These are creeks where children of the workers swim in the summer. Brooke says the Alabama Department of Environmental Management should immediately shut down Mine #7 and issue a cease-and-desist order to the company. (abc3340.com, May 3)

Weekly solidarity rallies are being held at Tannehill State Park. Community support, including fundraisers and a food pantry, is helping the striking miners and their families keep going.