Richard L. Trumka led the UMWA through some very turbulent times in the 1980s and early 90s.

And although he went on to national labor leadership, he never forgot his roots as a coal miner, a coal miner’s son and a coal miner’s grandson. He remained a proud dues paying member of UMWA Local Union 6290.

His last public remarks were captured in a video he sent to be shown at the UMWA’s Warrior Met Coal rally on August 4, 2021.

He wanted to be in attendance at the rally, but had a very important previously scheduled event — celebrating his grandson’s birthday.

He was able to do both things.

Click here to read a statement from President Roberts on the passing of his dear friend.

The UMWA will forever be indebted to the strength, determination, and commitment to the membership that Richard Trumka displayed as President, and then President Emeritus, of our union. He accomplished much in his long history of labor union leadership, but there is one last great mountain that he has left for us to climb without him: Restoring the right to organize in America through the passage of the PRO Act.

The UMWA believes it is more than appropriate not just to dedicate the passage of that critical legislation to Richard’s memory, but to rename the bill the Richard L. Trumka Protecting the Right to Organize Act of 2021.

A livestream of Richard Trumka’s mass is available on our Facebook Page.

The following burial service is adopted to be used at funerals of deceased members of the United Mine Workers of America.

Fellow Workers: We are assembled here today to pay a last sad tribute of love to our departed friend and brother/sister. This solemn occasion speaks forcibly of our mortality. We can say with Psalmist: “What is man that Thou art mindful of him, or the son of man that Thou visiteth him, for man that is born of woman is full of trouble and sorrows. He cometh forth like a flower and is cut down. Our years of labor are brought to an end. Our dust shall return to the dust as it was, and our spirit to the God who gave it.”

Again, we are reminded that we, too, are but mortal and will soon break the tenement of clay and depart for the hereafter, and it behooves each one of us to follow a line of conduct that will bring about a closer friendship, one that is true to God and humanity.

All our beautiful surroundings tell us of God’s greatness and goodness, of the universe of which we are child of his creation.

But why should we be sad and mournful, when God can give us consolation while living here on earth, for His promise is that we shall meet again in the realms above, for the Word of God teaches us that we shall again meet after death.

And now, our fellow worker, we pay the last sad rite and tribute of respect, the last one we can pay you in this world, placing on your grave these evergreens as a token of respect, that thy memory shall be with us always, though thou hast paid the debt and hast gone to the realms above.

And now to the family and friends of this, our deceased brother/sister, we tender our heartfelt sympathy in this, their sad hour of affliction, and bid them look to God for His tender mercies, for He alone can give them consolation.

And now, fellow worker, we bid thee a tender and loving farewell. Let us pray: And now may grace, mercy and peace from God the Father, Son and Holy Spirit rest and abide with you now and forevermore.

Ian Lavery, the former President of the National Union of Mineworkers and a Chairman of the Trade Union Group of Labour MPs, wrote the following letter of remorse to UMWA International President Roberts on the passing of Richard Trumka. 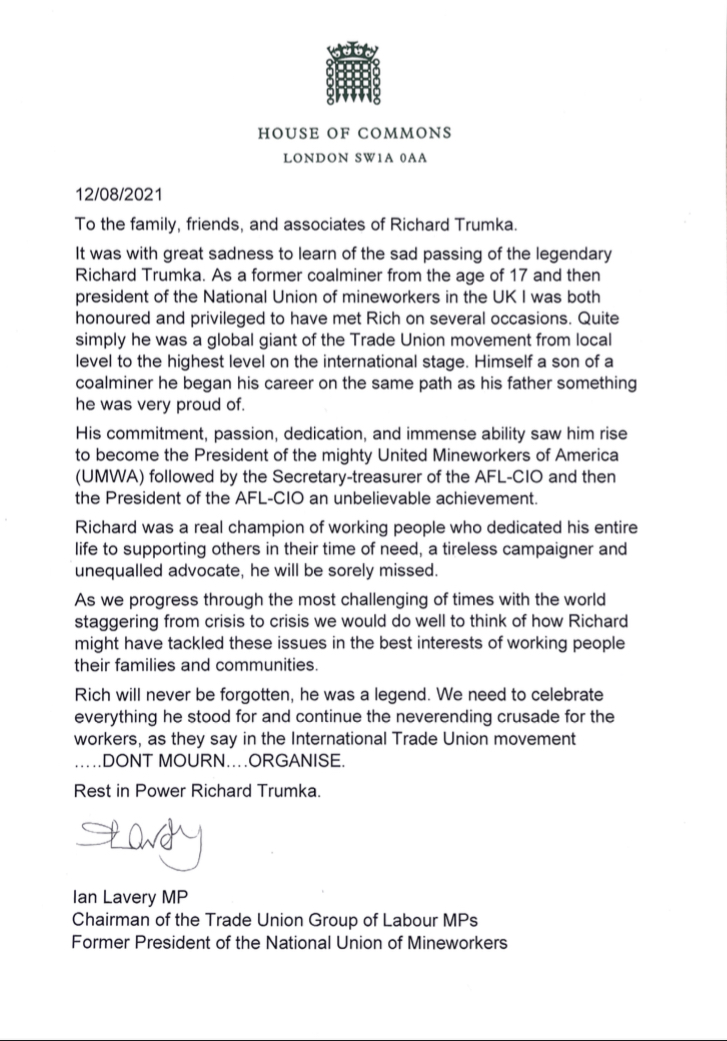